Making the decision to transition a co-sleeping toddler to their own bed is a joyous occasion. Sure, you’ve looooved co-sleeping with them.  But as with all great things, at some point you realize it’s time to move on.

And in this case, moving on means transitioning from co-sleeping to a toddler bed.  Whether it’s overcrowding, time to welcome a new baby, or just the right time for your toddler, you will reach a point where your co-sleeping toddler needs to move out!

So how do you do that?  How do you get your toddler to sleep in their own bed after co-sleeping? Or, as so many like to point out, are you destined to sleep with your child until they leave for college?

My husband and I co-slept with our son until he was 2 and then began the transitioning process.  And believe it or not, it was way easier than we thought!  Just like with breastfeeding, the transition seemed to be 1,000 times easier for my toddler than for me…which was a relief because I ended up being the only one that needed to cry-it-out. 🙂

Obviously every child (and parent) is different, so some tips may work better than others, but this is what worked for us.  And as I said, we were able to pull it off without any crying-it-out (at least from the toddler).

So if you need to figure out how to get a toddler to sleep in their own bed after co-sleeping, give some of these tips a try: 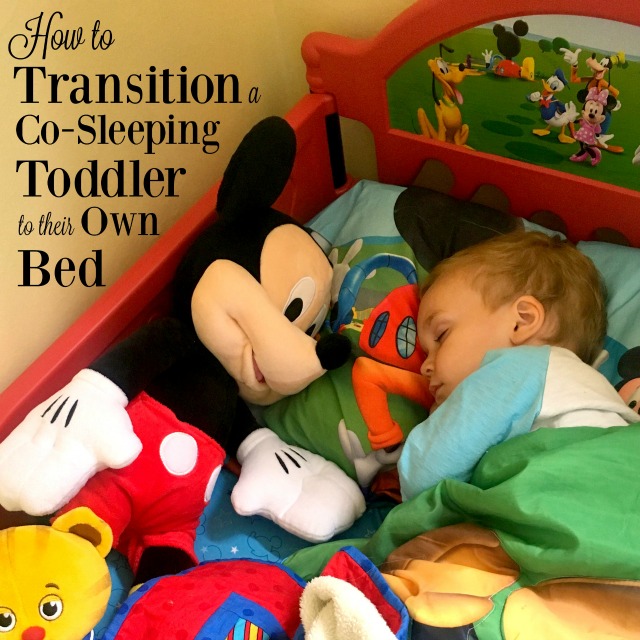 I’m a huge fan of breastfeeding, so I’m not suggesting that you stop breastfeeding before you’re ready (I breastfed my son for about 22 months).  But I will tell you that life will be a whole lot harder for both of you if you attempt to transition a co-sleeper while also breastfeeding them.

So it might be better to wait to transition until you are ready to wean.  This will make it much easier for your toddler to sleep through the night and is the first big step towards them falling asleep without having to be physically attached to you.

Related post: 10 Things I Didn’t Know About Weaning a Toddler

Get Them Used to Sleeping Alone in Your Room

So after you’ve got them to sleep, leave the room!

Let them experience waking up alone.

Don’t stay with them for nap times.

Do everything you can to let them build some independence in the environment they’re used to before exposing them to something totally new.

And once they wake up, you can go to the right away so that they gradually start to realize that you’ll always be able to get to them within a few minutes.

Get Them Used to Falling Asleep without Cuddling

Once they can sleep alone in your room, start to physically distance yourself a bit.

I still stayed next to my son, but I stopped cuddling.

At first I just got him used to me having my back turned and then I would only sit in the bed next to him.

Eventually we moved to holding hands and before long, he could just roll over on his own and fall asleep.

Now for the fun (and terrifying) part!  Getting them into their own room!

My biggest advice here is to make it really, really exciting…irresistible even.

I’m sure if you’re really creative, you can easily do this without spending a penny, but for us it helped to indulge a bit.  We timed his transition around his second birthday, so we used that opportunity to add a few new items to his bedroom:

Every transition I’ve ever had to do has always been easiest when I started with nap times.  Getting a co-sleeping toddler to sleep alone was no exception. They’re so much more tired that they fall asleep way easier (and quicker) and I was always less likely to be tired on my own.

I started with nap times and before long, he was comfortable in his new bedroom, which made nighttime transitions much easier.

Another thing that often happens with co-sleeping families is that you have far less steps in the bedtime routine than non co-sleepers tend to have.  You just don’t need it.  They’re fine just sleeping next to you.

So now it’s time to make sleeping in their own room seem totally fun and exciting.

As I said earlier, one of our new routines was using the star machine and looking at all the stars on the ceiling.

We also added reading books, singing songs, and a little cuddling (I know I told you to stop that!! More on that below…).  Anything you think will work, give it a try!

Two Steps Forward, One Step Back

This is more of a warning than a tip. Be prepared to have bad days, regress a bit, or reintroduce things you thought you were done with.

What’s most important is that you’re making progress in the right direction.

We were in a great routine of my son sleeping alone in our room, but when we moved him to his own room it shook things up quite a bit.  He was excited, but it was still a lot.

So we brought the cuddling back and spent a little more time together (but in his own bedroom).

But once he was comfortable again, we slowly pulled that back again.

This isn’t a race, so plan on giving your toddler some time to adjust.  Often one step back enables you to take two steps forward!

Transitioning from co-sleeping is a big deal for them, so it’s unlikely to happen overnight.

The reality is that your toddler is most likely more ready for this transition than you are…so follow their lead when you can!

When I brought the cuddling back, I was constantly trying to pull away to get back to our non-cuddling routine.  But he would just cling tighter and tighter to me.  Finally one day I was so tired I just said “Fine, we’ll cuddle as long as you want.”

Guess what happened.  30 seconds after I would have attempted to pull away, he pulled away on his own.  Giving him a little control over the situation was all I needed.  One day a few weeks ago, he looked at me during nap time and waved goodbye.  He wanted me to leave!  So I left the room and 5 minutes later he had fallen asleep on his own.

My little co-sleeper was transitioning himself!

Let Them Back in Your Room, But Not Your Bed

During our co-sleeping transition we had many nights that were just too tough to push through.

Either my toddler wasn’t feeling good or I was just too tired to soothe him back to sleep in the middle of the night.  I was too afraid to bring him right back to our bed, but I just couldn’t handle sleeping on his bedroom floor anymore.

So we came up with a great compromise.  We would let him come back to our room, but he wasn’t allowed in our bed.

We got an amazing toddler air mattress that we put next to our bed and he could sleep on that if he had to.  It was close enough that we could hold hands, but my husband and I still had our bed to ourselves.  I told my son before we went upstairs that he could only go to our room if he slept in the air mattress and that was good enough for him!

For the most part, co-sleeping parents are naturally patient people (at least with their kids!).

We’ve let our kids take their time, avoided crying-it-out, and made unbelievable sacrifices to our own schedule to make sure our little guys are comfortable.  Getting your co-sleeping toddler to sleep in their own bed is no different.

Give it time and it will be well worth it!  We made a few different efforts along the way to get our son into a crib and they never worked.  He just wasn’t ready.  I

f your toddler is scared or freaking out, then try to give them more time!  It won’t be long before they truly are ready.

When all was said and done, it took less than a week to get my son consistently falling asleep in his bed, but about 6 months before he was sleeping through the night alone in his room.

This may seem long to a lot of people, but we managed to avoid crying-it-out and no one was pushed farther than they could go.  It worked for us!

Good luck with your own co-sleeping transition!  Let me know if you have any other tips for how to get a toddler to sleep in their own bed after co-sleeping!

You may also be interested in: What to Do if Your Child Hates the Bath

If you’d like more tips, tricks, and inspiration on parenting and raising happy kids, subscribe to my Parenting Mailing List for notification when new posts are published.  Or, if you want to receive notification for all new posts from MBAsahm, join my Main Mailing List and receive tips on achieving financial freedom and living a fulfilled life in addition to parenting and raising happy kids. I hope you enjoy everything you read!  Thanks for your time! 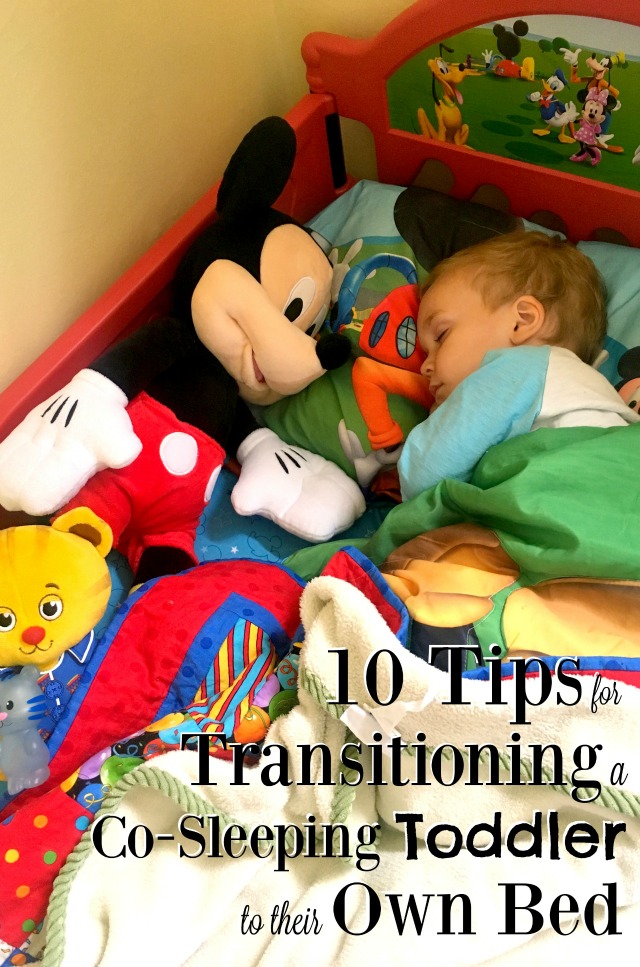