When my son was 4 months old, he reached out with the speed of light and grabbed my piping hot cup of coffee, pouring it all over himself. He had just started using his hands and it was the first time he had grabbed anything.  It was an awful experience and we ended up spending the weekend in the ER.

Luckily, he ended up being ok with only small scars that will eventually fade. Ironically, that incident was probably a blessing because it showed me just how quick those little hands are and has made me way more paranoid about where he is, particularly when we’re in the kitchen.

Unfortunately, he always wants to be with me when I’m cooking. I have tried distracting him with his favorite toys in the dining room, but he insists on being as close as possible.

So here is my latest attempt at keeping him safe and I’m in LOVE with it. 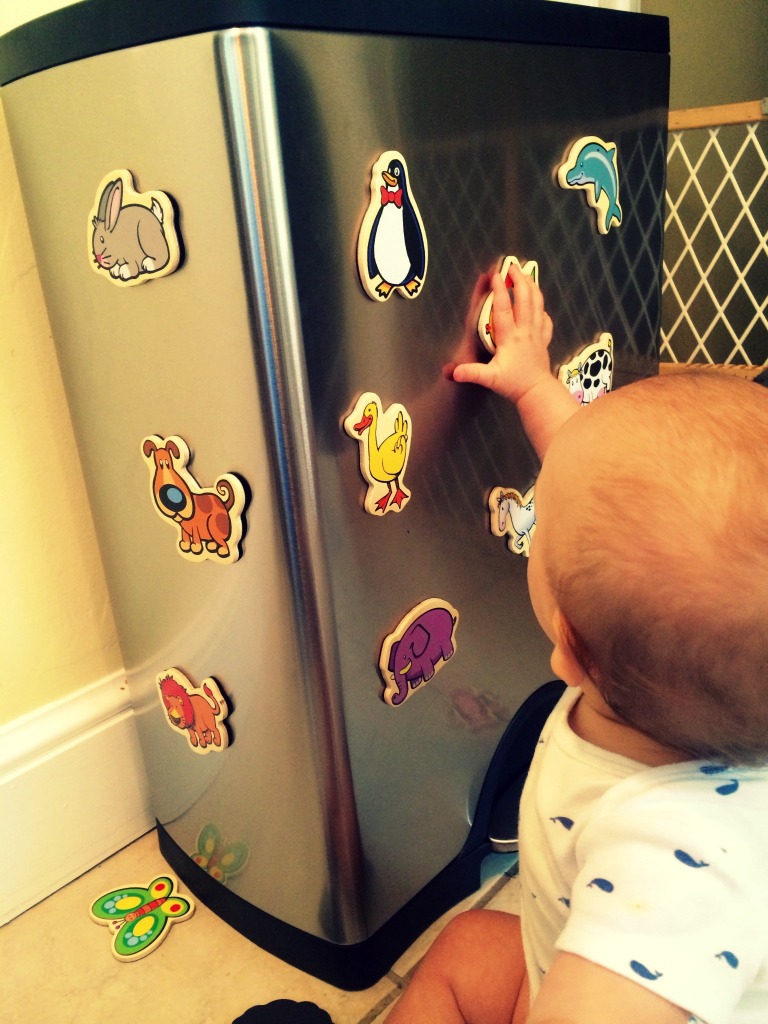 Basically, I’m utilizing my trash can, which is conveniently adjacent to the kitchen and out of the cooking area, and I’ve added toddler-safe magnets

(which surprisingly was fairly difficult to find). Now he’s happy to play because he feels like he’s in the kitchen, but stays away from my feet and thus the hot stove and oven.

Any stainless steel trash can should work.  I was so fed up with my tiny, tiny kitchen trash can that I sprung for a really nice 50 liter one that holds an unbelievable amount of trash and seals in any odor really well. I’m telling you, it was the moment I knew I was a mom – I was actually excited about my new trash can. 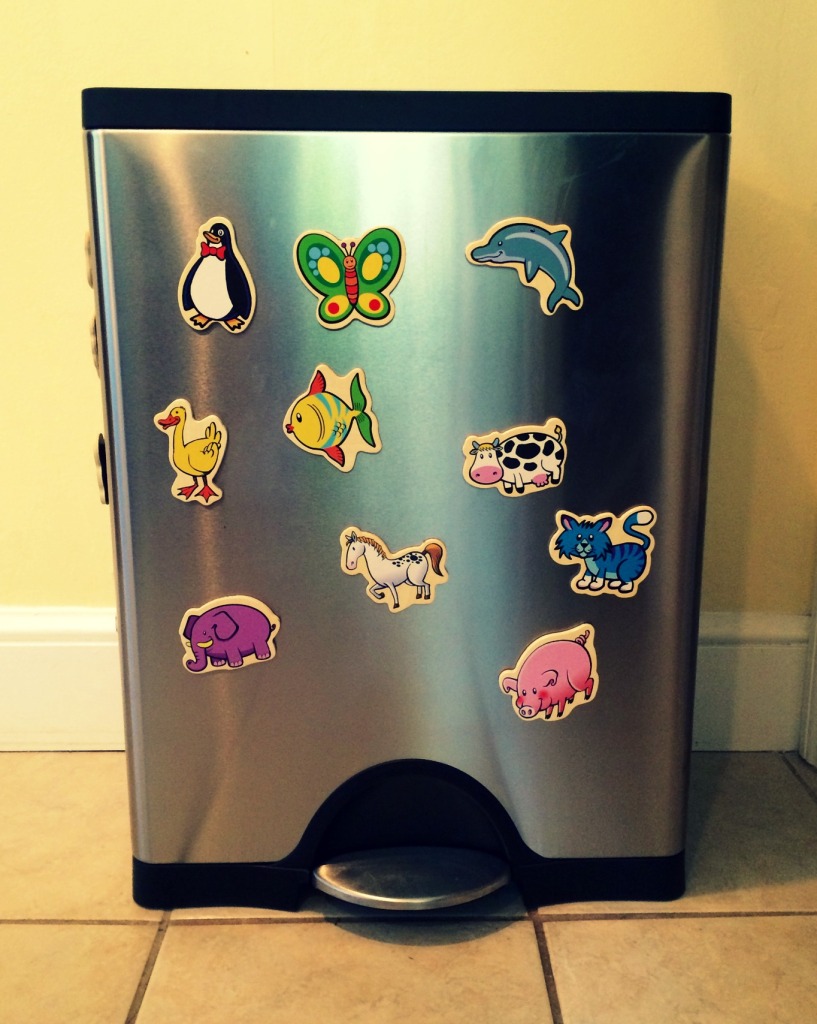 The magnets were the next piece and as I said, they were really hard to find.  I originally was determined to find the classic chunky letter magnets, but it turns out almost all of them pose a serious choking hazard because they are mounted on a small round magnet.  In fact, 90% of the magnets I came across were not safe for toddlers because of the size of magnet.  I finally found a set online

that had great reviews and was actually made for toddlers. 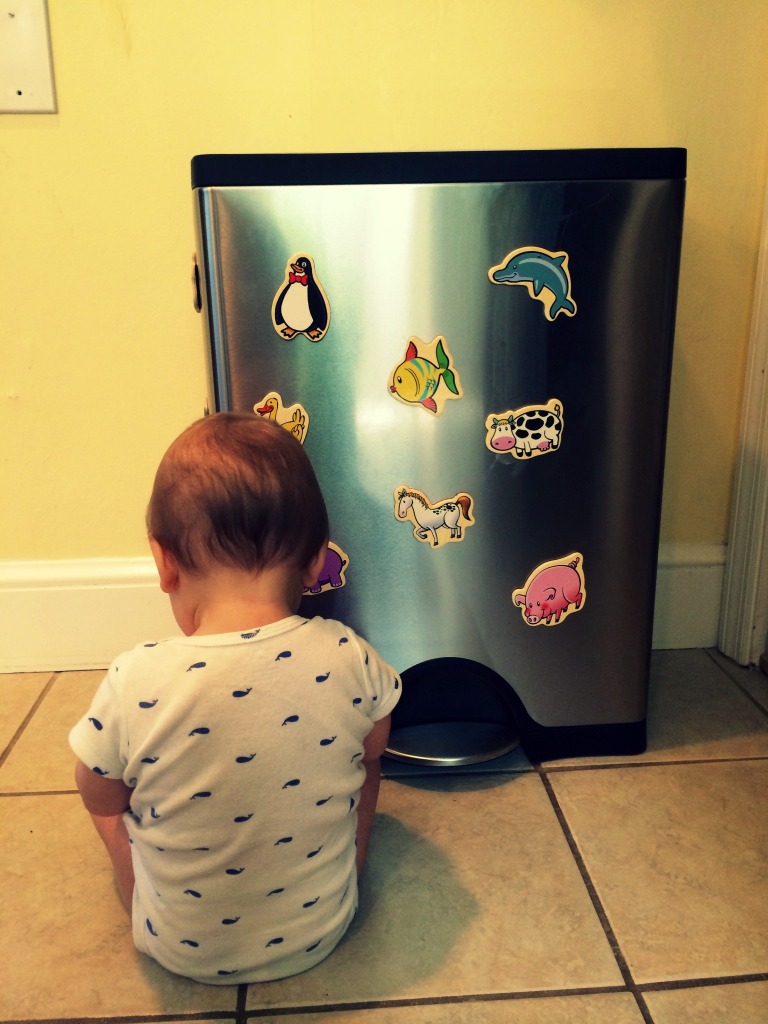 They’re adorable.  They aren’t letters, but it’s probably better to start with animals anyways.  The entire back is magnetic, so there is no small pieces that can break off.  And the animal part is thick and hard, so my baby can easily pull them off the trash can and put them right back on.

I know I sound crazy to let my son play with the trash can (I know how dirty it sounds!), but as long as it’s clean and he’s away from what’s cooking, I can’t imagine a safer arrangement (that still keeps him happy!). 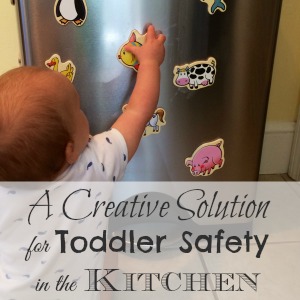